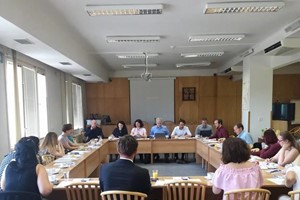 Pilot data collection in the context of domestic violence and gender-based violence in Health.

The round table was opened by Mgr Tomáš Jung, MBA from Ministry of Health of the Czech Republic. He welcomed all experts and highlighted that domestic violence and gender-based violence are serious social problems, because according to WHO research 35% women have experience with violence in partnership or non partner sexual violence.

Radan Šafařík, Director of the Department of Gender Equality of the Office of the Government of the Czech Republic, emphasized  the priority of prevention and combating domestic and gender-based violence, reducing the incidence of these forms of violence in Czech society, including assistance to vulnerable persons, which is postulated by a number of international and national strategic documents plan for the prevention of domestic and gender-based violence for the years 2015-2018).

The project itself, its activities, including the timetable, was presented by Mgr. Jitka Poláková, ProFem Director, o.p. The aim of the project is to design a monitoring system for collecting data on DN and GPN and piloting it to the extent that it will be able to acquire knowledge essential for its further setting in healthcare from the point of view of practical feasibility and barriers (systemic, professional, laic), including their intensity and defining the expected benefits economic and society-wide.

Following this were lectures by MUDr. Miroslav Zvolský from IHIS CR about the possibilities and limits of data collection, including the system and possibilities of coding – as well as lectures by Ing. Drahomíry Zajíčková from the RILSA, with examples of good practice abroad, vv. with a focus on the issue of GBV screening in health care, including prerequisites for the eventual realization and portability to the Czech Republic.

A discussion of leading experts and experts from both the academic and practical areas of public health, clinical psychologists, healthcare professionals, hospital management representatives and other interested professionals followed. The main topics discussed were the importance of data collection, its legal aspects, barriers and possibilities of realization of the collection itself, methodological recommendations, including concrete proposals of those involved in pilot testing.

As part of the project, we offer healthcare facilities to participate in pilot testing of data collection. If you are interested in participating, you can contact us at admin@profem.cz

The project was funded by the Ministry of Health of the Czech Republic.