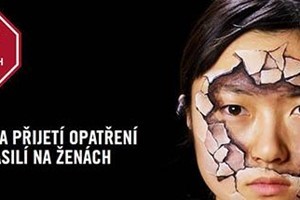 MEASURES AGAINST VIOLENCE AGAINST WOMEN

We call for an immediate adoption of the Istanbul Convention.

The Czech Women's Lobby and Amnesty International launched a petition for the immediate adoption of the Council of Europe Convention on Preventing and Combating Violence against Women and Domestic Violence.

ProFem has long advocated the adoption of the Istanbul Convention. The Czech Republic joined the Convention by signing in 2016, but it still did not ratify it, so we are calling for an immediate adoption.

If you want to support the adoption of the Istanbul Convention, you can sign the petition here.

every third woman in the EU has a personal experience of physical or sexual violence, every fifth has become a victim of dangerous persecution, and each second woman has been subjected to some of the forms of sexual harassment. Throughout the world, violence against women is such a huge problem that it can be called an epidemic. The Council of Europe therefore calls on the Member States to adopt, and thus ratify, a convention that will provide a common standard in fight against various forms of violence against women, and calls for concrete measures to be taken to prevent violence, protect victims and prosecute effectively. The Czech Republic belongs together with Hungary and Bulgaria to the countries of the European Union which have not yet ratified the Convention.

We urge the Parliament of the Czech Republic to urgently adopt the "Council of Europe Convention on the Prevention and Combating of Violence against Women and Domestic Violence" and in line with it to ensure:

Thank you for your attention on this issue.